The American Tribal Love-Rock Musical HAIR is a stage work in two acts. There are no specific scenes. The setting indicates the fluid-abstract world of the 1960’s as seen by, for, and about the “Flower Children” of the period.

Hair: The American Tribal Love-Rock Musical took the counter-culture of the late 1960s and transformed it into the musical medium, featuring profanity, nudity, drug use and songs that would become anti-Vietnam War protest tunes. The musical was never just a product of its time though, as its enduring appeal has proven. Thirteen of its most popular songs, many of which remain well-loved today, are included in this songbook arranged for piano, vocal and guitar with full lyrics and chord symbols and boxes, including: Aquarius • Donna • The Flesh Failures/Let the Sunshine In • Hair • Where Do I Go? • and more. Also includes an introduction about the show.

or buy it on SheetMusicPlus (But only 150 pages): 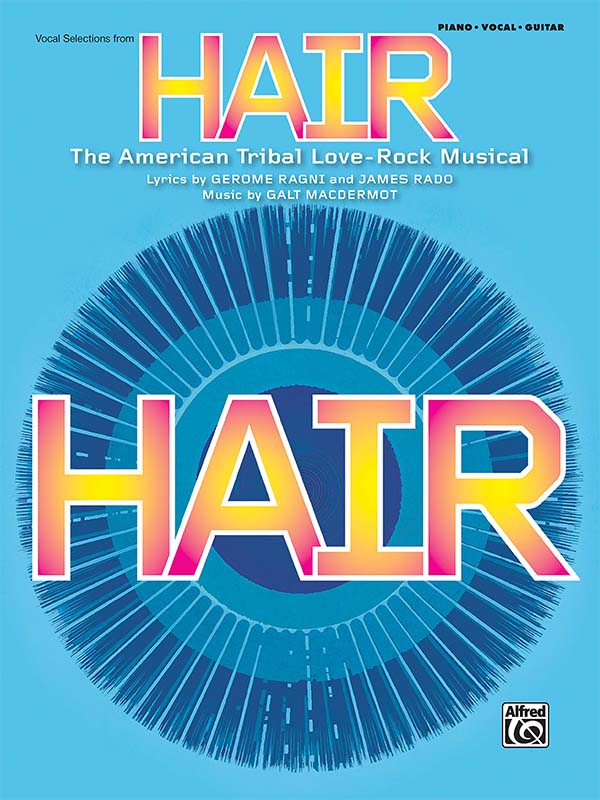 The American Tribal Love-Rock Musical is a rock musical with a book and lyrics by Gerome Ragni and James Rado and music by Galt MacDermot. A product of the hippie counterculture and sexual revolution of the late 1960s, several of its songs became anthems of the anti-Vietnam War peace movement. The musical’s profanity, its depiction of the use of illegal drugs, its treatment of sexuality, its irreverence for the American flag, and its nude scene caused much comment and controversy. The musical broke new ground in musical theatre by defining the genre of “rock musical”, using a racially integrated cast, and inviting the audience onstage for a “Be-In” finale.