Songbook “Tangos” by Carlos Gardel contains contains 18 fundamental tangos by Argentine singer and composer, for Piano, Vocal and Guitar, including the original lyrics.

For commercial use buy Carlos Gardel Tangos on Amazon 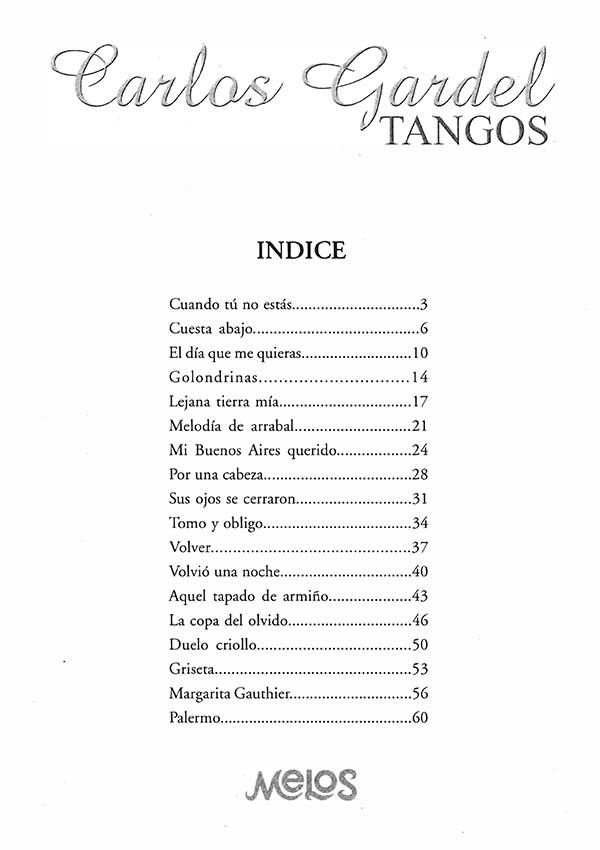 Carlos Gardel was an Argentine singer, composer and film actor. It is the best known representative (of the genre) in the history of tango. Initiator and maximum exponent of tango song, he was one of the most important interpreters of world popular music in the first half of the twentieth century, for the quality of his voice, for the number of albums sold (as a singer and as a composer), for his numerous films related to tango and for his worldwide repercussion.

Carlos Gardel (born Charles Romuald Gardès; 11 December 1890 – 24 June 1935) was a French-born Argentine singer, songwriter, composer and actor, and the most prominent figure in the history of tango.

He was one of the most influential interpreters of world popular music in the first half of the 20th century. Gardel is the most famous popular tango singer of all time and is recognized throughout the world.
He was notable for his baritone voice and the dramatic phrasing of his lyrics. Together with lyricist and long-time collaborator Alfredo Le Pera, Gardel wrote several classic tangos.

Gardel died in an airplane crash at the height of his career, becoming an archetypal tragic hero mourned throughout Latin America. For many, Gardel embodies the soul of the tango style. He is commonly referred to as “Carlitos”, “El Zorzal” (“The Song thrush”), “The King of Tango”, “El Mago” (The Wizard), “El Morocho del Abasto” (The Brunette boy from Abasto), and ironically “El Mudo” (The Mute).

In 1967, a controversial theory was published by Uruguayan writer Erasmo Silva Cabrera, asserting that Gardel was born in Tacuarembó, Uruguay. Other authors expanded upon this theory, and a museum to Gardel was established in Tacuarembó. But Gardel’s friends and family all knew him as a French immigrant from Toulouse. Scholarly researchers analyzed the contradictory evidence, especially French birth and baptismal records, and confirmed his birthplace as Toulouse.