“The Scientist” is the second single from British alternative rock band Coldplay’s second album, A Rush of Blood to the Head. The song was written collaboratively by all the band members for the album. It is built around a piano ballad, with its lyrics telling the story about a man’s desire to love and an apology. The song was released in the United Kingdom as the second single from A Rush of Blood to the Head and reached number 10 in the UK Charts. It was released in the United States as the third single and reached number 18 on Billboard’s Modern Rock Tracks chart. 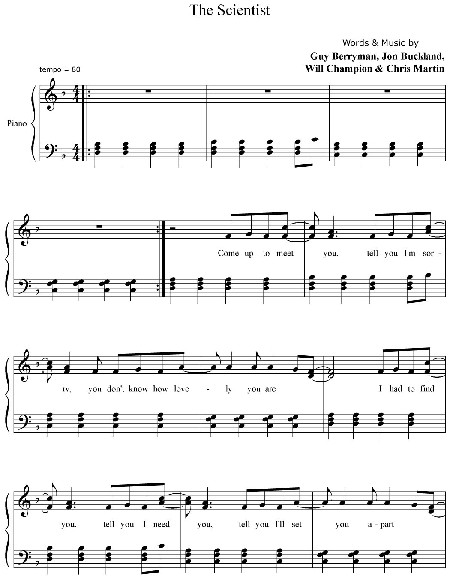 Tell me your secrets and ask me your questions
Oh let’s go back to the start
Running in circles, coming in tails
Heads on a science apart

I was just guessing at numbers and figures
Pulling your puzzles apart
Questions of science, science and progress
Do not speak as loud as my heart

Tell me you love me, come back and haunt me
Oh and I rush to the start
Running in circles, chasing our tails
Coming back as we are

Free Download “The Scientist” by Coldplay from Sheet Music ME

or Buy “The Scientist” by Coldplay on SheetMusicPlus

All music are owned by their respective owners. In downloading the sheet music from our website you are agreeing that they will be used only for personal, educational, and NON-commercial purposes.