The songbook 100 Best Songs of the 20’s and 30’s contains 100 greatest songs of the Golden Age of American popular music.

All of the songs in 100 Best Songs of the ’20s and ’30s are arranged for voice and piano; they contain the complete original words, and many feature diagrams and chord symbols for guitar and other stringed instruments. With the sheet music in this collection, these masterpieces can be played, sung, and enjoyed again and again – and can allow us to revisit a wonderfully creative period of American music. 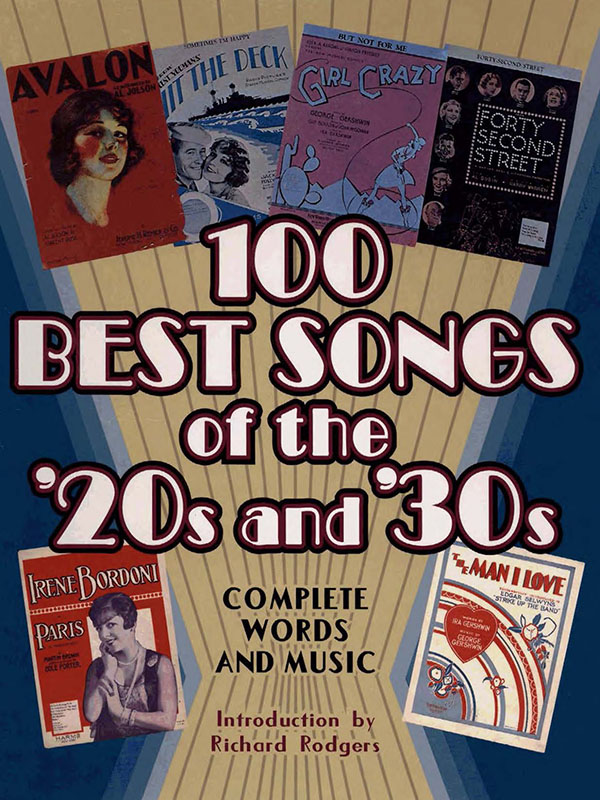 The 1920s and ’30s were the golden decades of American popular song. The melodies and lyrics created during these years were the work of outstanding artists who, in a relatively brief period, originated a new form of entertainment and brought it to a pinnacle of perfection.
The songs published between the two world wars were a part of the cultural renaissance in the United States, encompassing literature, art, dance, movies, theater, and music. Like many of the artistic accomplishments of twentieth-century America, the new music was commercial, linked to popular consumption.

The songs created for musical theater, movies, dance bands, and sheet music, along with the work of the great jazz and blues artists, are considered by many to be America’s most important contribution to world music.

George Gershwin, Cole Porter, Richard Rodgers, Vincent Youmans, Eubie Blake, Harry Warren, and others composed miniature masterpieces that are also outstanding entertainment. Many of the songs were instant hits in their day, played by the dance orchestras of such bandleaders as Paul Whiteman, Vincent Lopez, and Leo Reisman and popularized through bestselling sheet music and the newly ubiquitous phonograph record. They were also heard, on hundreds of evenings, in hit musical shows—most played in several cities before and after their Broadway runs and, during the thirties, in the movie musicals that reached into every corner of the nation.

This collection of the sheet music of the 1920s and ’30s contains the finest and best-known of the era’s songs. These enduring musical gems are still widely performed, both professionally and privately. Just saying their titles instantly conjures up their unforgettable melodies and the first lines of their lyrics. Some are famous pieces that will always be associated with the Roaring Twenties and Depression Thirties: their composers and lyricists may no longer be household names, but indelibly imbedded in the American memory are such songs as “Ain’t We Got Fun,” “Baby Face,” “Barney Google,” “Sweet Georgia Brown,” “The Birth of the Blues,” “Ain’t She Sweet,” “I Wanna Be Coved by You,” “Happy Days Are Here Again,” “Fine and Dandy,” and “Too Marvelous for Words.”

America’s finest musical talents produced the songs of this golden age, which have been enjoyed by a vast popular audience from their creation to the present. The best of these pieces not only are musically interesting, but also represent a perfect wedding of tune to lyric, of mood to verbal expression. Cole Porter was a virtuoso of both music and lyrics, and his “Anything Goes,” “Just One of Those Things,” “Let’s Do It,” “Night and Day,” “You Do Something to Me,” and “You’re the Top” are included in this collection. Porter’s lyrical cleverness, internal rhyming, and matchless ability to unite musical rhythm and verbal surprise is evident in one of the best lyrics of the period, from “I Get a Kick Out of You”.

Many of these exceptional composers worked with a variety of lyricist partners. Harold Arlen, well remembered for his score for The Wizard of Oz, wrote “It’s Only a Paper Moon” with Billy Rose and E. Y. Harburg, but composed “You’re a Builder Upper” with Harburg and Ira Gershwin. Richard Rodgers’s early songs were written with lyricist Lorenz Hart (“My Heart Stood Still,” “With a Song in My Heart,” “Ten Cents a Dance”), but he joined forces with Oscar Hammer- stein II in the 1940s to produce the classic musicals Oklahoma! and South Pacific. Hammerstein had previously written the lyrics for songs by Sigmund Romberg (“Stouthearted Men,” “Lover, Come Back to Mel”) and Rudolf Friml (“Indian Love Call,” “Rose Marie”).

Harry Warren composed mainly for the movies (usually with lyricist Al Dubin, but sometimes with Mort Dixon), and his songs virtually define the film musicals of the early 1930s. Included in this collection are Warren hits from Forty-second Street (the title song, “Young and Healthy,” “You’re Getting to Be a Habit with Me”) and Gold Diggers of 1933 (“We’re in the Money,” “Shadow Waltz”), as well as his “You Must Have Been a Beautiful Baby” and “Jeepers Creepers.”

Perhaps the greatest songwriting team of the era was the brothers Gershwin—George and Ira. A majority of their extraordinary songs are associated with classic twenties and thirties musicals. In this book are “Bidin’ My Time,” “But Not for Me,” “Embraceable You,” and “I’ve Got Rhythm,” all of which come from one of their best shows, Girl Crazy. “Of Thee I Sing” and “Strike Up the Band” are the title songs from two of their most ambitious works, musical satires that mix Gilbert and Sullivan-style operetta with jazzy, melodic tunes. (Of Thee I Sing, with a book by playwrights George S. Kaufman and Morrie Ryskind, won the Pulitzer Prize for drama in 1932.) One of the Gershwins’ most enduring and poignant love songs, “The Man I Love,” was included in, and then dropped from, a number of shows before finding immortality in recordings and cabaret performances.

George Gershwin’s songs, theatrical shows, and symphonic compositions influenced a generation of popular and classical composers in both Europe and America, among them Maurice Ravel. And the great Russian composer Dmitri Shostakovich thought enough of American popular music to make a symphonic arrangement of Vincent Youmans’s “Tea for Two.”