42 of the most famous classics arranged for simplified piano. These enchanting melodies supply students of the first and second levels of study with an introduction to the world’s finest music. 65 pages.
Publisher: Alfred Music

The arrangement for some of these songs are more difficult than you would expect in an easy piano book.

Just a fun relaxing level of music to remind me of many I learned when a younger student playing more advanced levels.

This isn’t for beginners but for those with a year or two of piano. The arrangements are easy and of excellent quality. I bought one for my grandson and liked it so much I’m buying one for myself.

I really love this book. My piano skills are very basic, but this book allows me to play songs that sound lovely to the ear and enjoy practicing. Many “easy piano” books are still pretty intermediate level and too hard for me. This one is actually easy enough for someone very early in their training to use but with pretty classical sounding melodies instead of the “row your boat” type songs the kids books have. Love it and wish this author would do more books like it – or better yet some pop songs for when I don’t want classical.

Lots of quick fun. Wish the selections were longer however but a nice “taste” nevertheless.

Great book with easy to play classics. My husband is a noobie to piano and could pluck out the first one “minuet”. Claire De Lune was beautiful and dumbed down enough that I could play it 🙂

My husband has bought me a piano as I had an electric one but wanted a real upright piano. I have taught myself to read music and am teaching myself to play as I only mainly like classical music am very pleased with the. Music c books

I’m an adult who started piano lessons, when not even knowing how to read music. I was able to get to level 4 of Alfred’s Piano books, before I was satisfied with where I was, and stopped taking lessons. When trying to find books on my own, to play, I was over-whelmed, but the good reviews of this book caught my eye, and I ordered it. The music is arranged simply enough for me to sight read, yet it sounds lovely. I enjoy playing from this book, because it doesn’t cause frustration, or require playing any of the songs 50 times to get it right. If grading it by levels of Alfred’s lesson books, I’d say these are level 3 maybe? 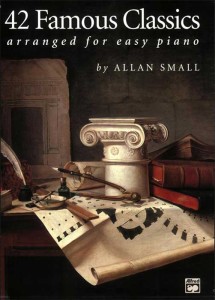