The Very Best Pop Songs of All Time content:

A Whiter Shade Of Pale is the debut single by the British rock band Procol Harum from 12 May 1967. One of the anthems of the 1967 Summer of Love, it is one of the best selling singles in history, having sold more than 10 million copies worldwide.

Careless Whisper is a pop ballad by George Michael and Andrew Ridgeley of British music duo Wham!. Released on 24 July 1984 on the Wham! album Make It Big. The song features a prominent saxophone riff, and has been covered by a number of artists since its first release.

He Ain’t Heavy, He’s My Brother is a ballad by Bobby Scott and Bob Russell. Originally recorded by Kelly Gordon in 1969, the song became a worldwide hit for The Hollies later that year and a minor hit for Neil Diamond in 1970.

How Deep Is Your Love is a pop ballad by the Bee Gees released as a single in September 1977. It was ultimately used as part of the soundtrack to the film Saturday Night Fever. It was a number three hit in the United Kingdom and Australia.

If Not for You is a song by Bob Dylan, recorded for his 1970 album New Morning. Dylan recorded the album version in August 1970, having first recorded the song in a session with George Harrison on May 1 of that year.

If You Don’t Know Me by Now. Song by Kenny Gamble and Leon Huff recorded by the Philadelphia soul musical group Harold Melvin & the Blue Notes. It became their first hit after being released as a single in September 1972.

If You Leave Me Now is a song by the American rock group Chicago, from their album Chicago X. It was written and sung by bass player Peter Cetera and released as a single on July 31, 1976.

One Moment in Time is a sentimental ballad by American singer Whitney Houston and written by Albert Hammond and John Bettis. It was released by Arista Records on August 27, 1988, as the first single from the compilation album, 1988 Summer Olympics Album: One Moment in Time, the soundtrack to the games.

Tears in Heaven is a song by Eric Clapton and Will Jennings, written about the death of Clapton’s four-year-old son, Conor. It appeared on the 1991 Rush film soundtrack. The song was Clapton’s best-selling single in the United States and reached number two on the Billboard Hot 100.

The Lady in Red is a song by British-Irish singer-songwriter Chris de Burgh. It was released in June 1986 as the second single from the album Into the Light. The song was responsible for introducing de Burgh’s music to a mainstream audience worldwide.

The Long and Winding Road is a song by the Beatles from their 1970 album Let It Be. It was written by Paul McCartney and credited to Lennon–McCartney.

Wind Beneath My Wings is a song written in 1982 by Jeff Silbar and Larry Henley. The song was first recorded by Kamahl in 1982 for a country and western album he was recording. The song appeared shortly thereafter in charted versions by Colleen Hewett, Lou Rawls, Gladys Knight & the Pips and Gary Morris.

This Guy’s in Love with You is a song written by Burt Bacharach and Hal David, and recorded by Herb Alpert. Although known primarily for his trumpet playing as the leader of the Tijuana Brass, Alpert sang lead vocals on this solo recording, arranged by Bacharach.

Unchained Melody is a 1955 song with music by Alex North and lyrics by Hy Zaret. North wrote the music as a theme for the little-known prison film Unchained. Todd Duncan sang the vocals for the film soundtrack. The Righteous Brothers recording achieved a second round of great popularity when featured in the film Ghost in 1990.

What’s Love Got to Do with It is a song recorded by the American singer Tina Turner, released in 1984. It was taken from her fifth solo album, Private Dancer and became Turner’s most successful single.

Where Do Broken Hearts Go is the fourth single from Whitney Houston’s second album, Whitney. The ballad was released on February 25, 1988. The song was written by Frank Wildhorn and Chuck Jackson.

Wonderwall is a song by Oasis. The song was produced by Noel Gallagher and Owen Morris for the band’s second studio album (What’s the Story) Morning Glory?. According to Gallagher, “Wonderwall” describes “an imaginary friend who’s gonna come and save you from yourself”.

Yesterday is a song by the Beatles, written by Paul McCartney and credited to Lennon–McCartney. It was first released on the album Help! in August 1965. The song reached number one on the US charts.

Your Song is a song by Elton John from his self-titled second studio album. It was written by John and his longtime collaborator Bernie Taupin. The song was recorded at Trident Studios in London in January 1970.

Buy The Very Best Pop Songs Of All Time on Amazon 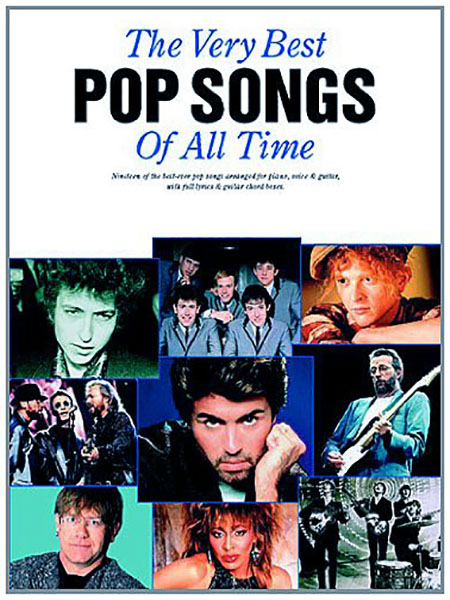 The Very Best Pop Songs of All Time Songbook