Cabaret is a musical based on the little novel “Goodbye to Berlin” by Christopher Isherwood. It focuses on the nightlife at the Kit Kat Klub, and revolves close to young American writer Cliff Bradshaw and his relationship with English cabaret entertainer Sally Bowles.

The 1966 first Broadway creation became a hit, inspiring many consequent productions in London and New York, as well as the 1972 film of the same name.

The sheet music book contains every starring song from the original broadway show, the film, and the 1998 revitalisation with Alan Cummings. It also includes the outtakes.

There is some older copy of the Cabaret movie vocal selections book. This is the better book.

The Full Vocal Score however contains all the music from the stage show (original version), including Playouts, Changes of Scene, Entr’acte, Curtain calls and Exit music. Also it gives you the instrumentation of different musical layers.

If you only look for the songs (and ALL the songs with chords, both show and film) I’d recommend “The Complete Cabaret Collection – Author’s edition”.

Songs:
Don’t Go
Don’t Tell Mama
I Don’t Care Much
If You Could See Her
It Couldn’t Please Me More
Married
Maybe This Time
Mein Herr
Money, Money
Perfectly Marvelous
So What?
Tomorrow Belongs To Me
What Would You Do?
Willkommen 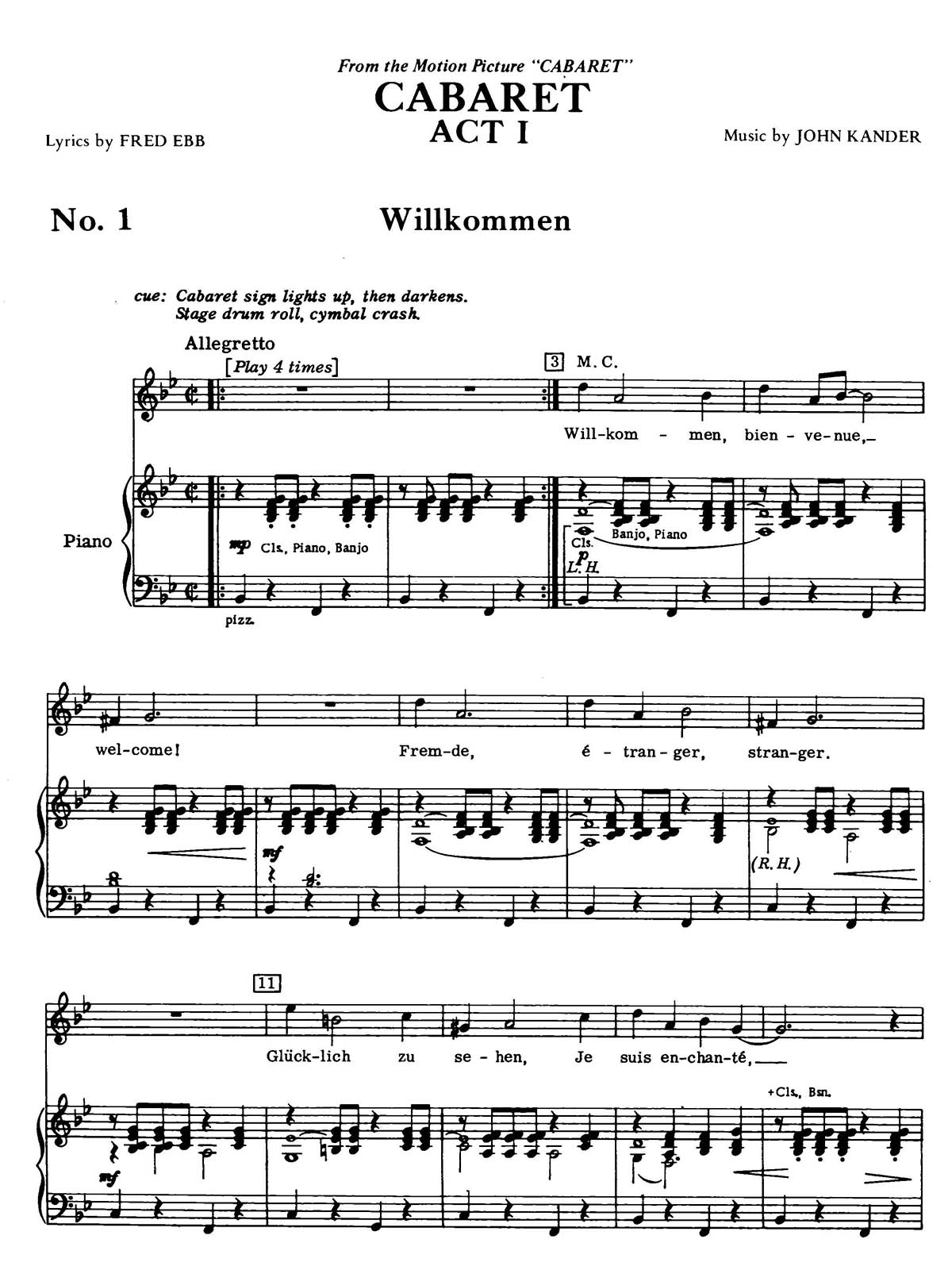 or you can buy the books on SheetMusicPlus

Find the Cabaret on Amazon:

The musical opened on Broadway on November 20, 1966, at the Broadhurst Theatre, transferred to the Imperial Theatre and then the Broadway Theatre before closing on September 6, 1969, after 1,165 performances and 21 previews.

Directed by Harold Prince and choreographed by Ron Field, the cast featured Jill Haworth as Sally, Bert Convy as Cliff, Lotte Lenya as Fräulein Schneider, Jack Gilford as Herr Schultz, Joel Grey as the Master of Ceremonies (Emcee), Edward Winter as Ernst, and Peg Murray as Fräulein Kost. Replacements later in the run included Anita Gillette and Melissa Hart as Sally, Ken Kercheval and Larry Kert as Cliff, and Martin Ross as the Emcee. In addition, John Serry Sr. performed as the orchestral accordionist.